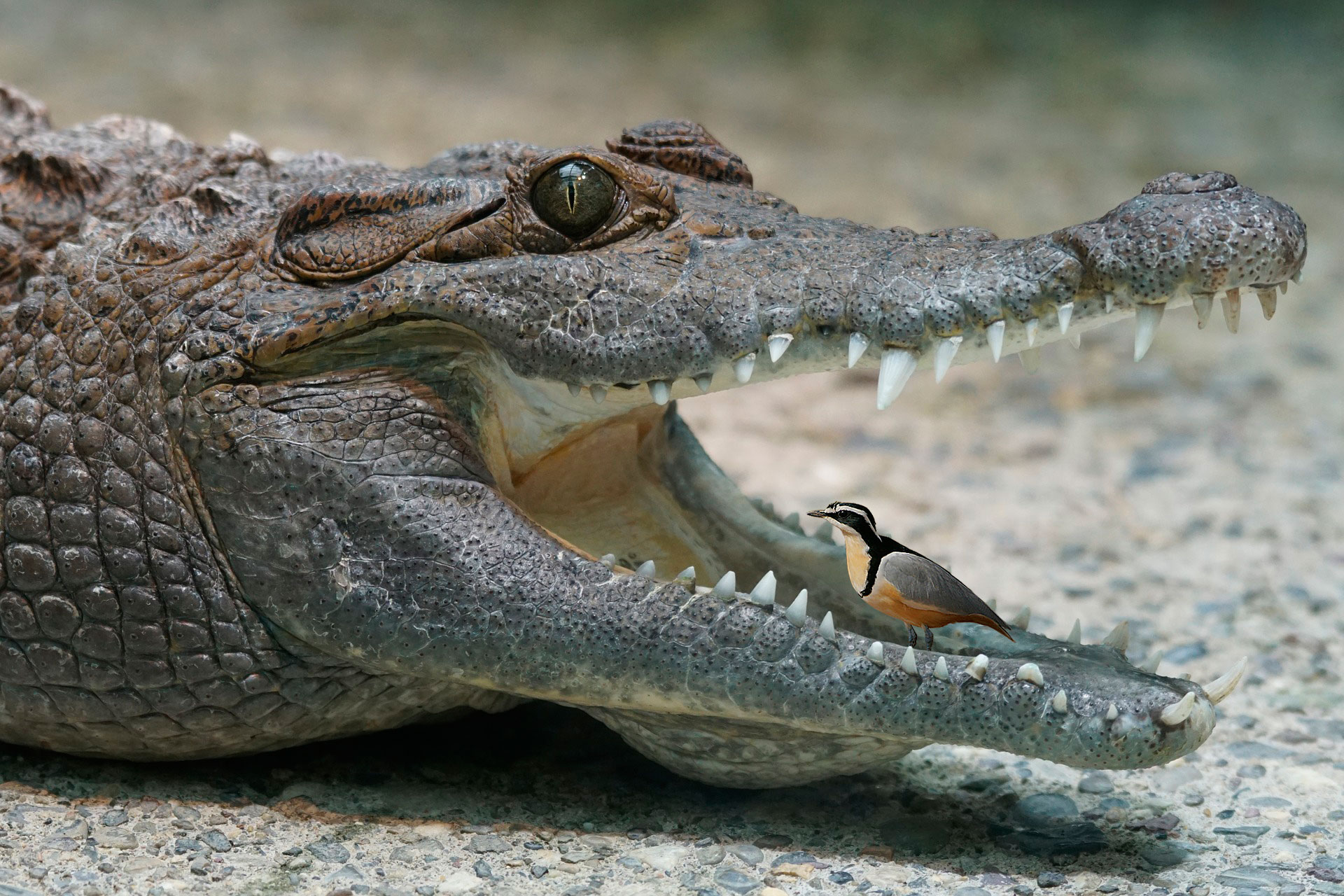 Crocodile and the Plover Bird

What do you think this courageous bird is doing in the crocodile’s mouth? Why isn’t the crocodile doing anything to her?

This tiny bird is called the Egyptian Plover bird.

She gets into the crocodile’s mouth and picks out the tiny bits of food stuck in his teeth.

What does she do with them? She eats them and often this completes her diet.

This cleans the crocodile’s teeth and keeps his mouth fresh and free from infections.

This cleans the crocodile’s teeth and keeps his mouth fresh and free from infections.

So, the Plover bird gets her food and the crocodile gets his mouth cleaned. In this way, both are able to help each other!

Let us get to know a little bit more about these creatures :

A crocodile is a carnivore which means it eats all kinds of animals that live in the water and even cattle. They have strong jaws. They do not chew their food, just swallow the entire prey into their stomach where it is broken down.It is while swallowing that the bits of flesh get stuck in their teeth. You will find them swimming just like this beneath the surface of water with their eyes and nostrils just above.

Often you will find them lazing around in the sun with their mouth wide open. They have powerful jaw muscles and can keep their mouth open for a long time. Let us look at the Plover Bird closely . She lives in pairs or in small groups near water bodies, just like our crocodile does.

They recognize the crocodile’s need when it is lying with his mouth open and bits of food stuck in between. They get into its mouth boldly, eat the food and fly away. Even when a Plover Bird is not around, his teeth still need to be cleaned!

And a crocodile needs all this cleaning in spite of the following fact :

A crocodile can grow new teeth through out his life. Each time an old tooth falls out a new one will grow up to replace it!

The Egyptian Plover Bird, as the name suggests is found in Egypt in Africa. Crocodiles on the river Nile are the ones that benefit from their service. Nile crocodiles are the second largest in the world and are so ferocious that they can walk to areas much far from their water home to catch cattle prey.

If you have gone through the article on Bats on this website, you may have read about the way we produce sound through vocal chords. But crocodiles do not have a vocal chord!

They have a voice box at the back of their throat through which they force air from their lungs to the nostrils.

A young crocodile calls to the adult when he is in danger and also makes a lot of noise while being fed. Big crocodiles growl and hiss at each other. They also pose and move their bodies in different ways to communicate different things to a fellow crocodile.

Let us now take a dip in the deep sea where you will find living beings helping each other in even more unique ways.

*The header image of this page is for representative purpose.