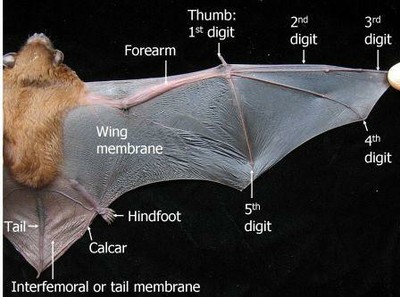 How do bats fly ?

Look at the skeleton of a bat, given on the right. Notice how similar it is to our own skeleton. They have the same number of fingers as ours : five. All these “fingers” are connected by a layer of skin, so thin that light can pass through it. Such a thin layer of skin is called a membrane.

There is also a membrane which connects their fingers to the main body. This thin skin membrane connecting all the fingers of a bat, is what we observe as its wing. The small thumb at the top “peeps out” of his wings. Bats use this for climbing on trees. Some bats also have a membrane connecting their legs and the tail. This helps them to slow down while flying. They also use it as a spoon to put insects into their mouth! Now that we know how is a bat’s wing made, we see how they use them to fly.

Bats have strong muscles in their backs and chest. Some of these muscles pull the wings up in an “up-stroke” and some of these bring them down during “down-stroke“.

Bats fold their wings while they are making an “up-stroke”. This reduces the opposition from the air (Air Resistance) and they save their effort. During the “down-stroke” they push their wide wings downwards with great force ( called Thrust ) and in return they get a lift from the air and rise upwards.

They dive through the air sharply and weave their wide wings across so quickly that not even birds can match. A bird ‘ s wings are much more fixed. Many bats can stay and hover in one place like helicopters or humming birds.  Many of them glide for short periods and stop suddenly.

We asked you a little while earlier : Why do they come out at night?

This helps them to avoid some fierce birds that may hunt for them during daytime. Also they take advantage of so many insects that are active at night, with no other animal around to catch them.

Microbats that use echo – location have large ears and leaf-shaped flaps of skin on their noses.They come out of their roosts (remember?) in the night and hunt for insects.

Now let us finally understand Echo Location, the way they catch their prey insects without being able to see them at night.

click: How do bats see with the help of sound ?