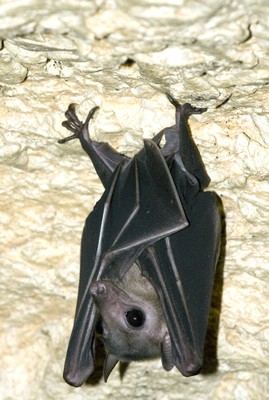 Have you ever seen a bat during the daytime?

Chances are your answer would be “No”. They are active only at night.

What do they do during the daytime? Can’t they see with the help of light, like we do? Don’t they have eyes? Why, then, do they come out in the night, when there is no proper light for eyes to be used?

So many questions and now answers come!

Bats live together in large groups called ‘colonies‘ or ‘camps‘ and spend the entire daytime hanging upside down in caves, hollow trees, old buildings and roof spaces. This is called “roosting”. You will be surprised to know that the world’s largest colony has 20 million bats!

There are two main kinds of bats : Megabats and the Microbats.

Megabats are large bats that eat fruits and nectar of flowers. Microbats are smaller bats who eat insects.

There are also bats that eat larger animals like frogs and fish.

Within these two main kind , there are nearly a thousand different kinds of bats. Among these “Flying Fox” is the largest. Like other megabats, it finds fruits with the help of its good sight ( yes , the normal seeing, with the help of light ! ) and smell. On very hot days, they keep cool by fanning themselves with their wings.

You know that bats fly.

But are they birds ?

No, they do not build nests, do not have feathers and also do not lay eggs .

Then what class of living beings do they belong to?

Mammals are a class of living beings who produce milk from their bodies and feed it to their babies. They also have hairs on their bodies. They are warm – blooded which means they have to consume a lot more food than other animals to keep their body warm all the time. Human Beings are mammals.

Just like us, bats give birth to only one baby at a time. They live for 30-40 years, much longer than a mouse, which looks similar. So bats are much closer to us than to birds or rodents like mouse, squirrel or a guinea pig.

Other mammals we should know of are : Monkeys, Dogs, Bears, Elephants, Whale, Dolphin, Deer, Pigs and Rabbits. Most among these live on land, a few on trees and a few under water.

But can a mammal fly? Birds and insects seem to be the only living beings with wings and most of them are not mammals. Have you seen a living being which feeds milk to its baby, also able to fly ? Think.

Well,  bats are the only mammals that can fly!

And they can fly much better than most of the birds. Let us see what makes them so good at flying. It is of course the way their wings are made.