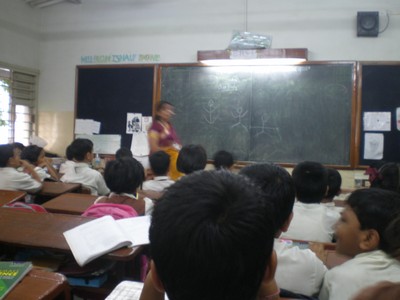 Narratives in the Classroom

In Class III, The students and teacher were engrossed in finding about ‘Our body’. The lesson begins with a story called Mini’s fall. In fact, all the Units of Small Science begin with a story about two curious children Apu and Mini and their various experiences with the immediate living world. Teaching Science through narratives is a much researched field and researchers have pointed out the importance of bringing in such modes of Science communication in the classroom. The importance of the narrative in human cognition  have also been discussed by Cognitive Scientists like Jerome Bruner who has pointed out in his book, Acts of meaning what does not get structured narratively in the Brain suffers loss of memory. Also stories in a Science classroom create motivation and interest. In the lesson ‘Minis fall’, Mini gets hurt when she falls off the swing. Apu rushes her home to Amma who cleans her wounds. In the discussion that follows between Amma, Apu and Mini, introductory scientific ideas about the basic structure of the human body are introduced. Children engaging in this exercise are vicariously experiencing injury through Minis fall and are therefore motivated to think about what lies beneath the skin. Some of the questions that Apu raises are not answered by Amma which can be taken up in a class room discussion.

The teacher started the lesson by curling her hair with her fingers and asked the children what parts of the body are involved. The children responded enthusiastically with one of them even saying, ‘joints’! The teacher then went over other action verbs like tickling and sneezing. When probed about the body parts involved in the act of sneezing one of the students responded ‘voice’ which she appeared to think was a body part..not a counterintuitive observation at all, i thought…one uses speech to act upon the world as much as one’s body parts!

The teacher introduced the idea of growth by talking of development of a human infant into an adult. The children seemed to relate to this idea very well. They already seemed to know about the importance of food in growth and repair. There was much debate over whether one could feel with the teeth when one of the children brought up tooth ache.