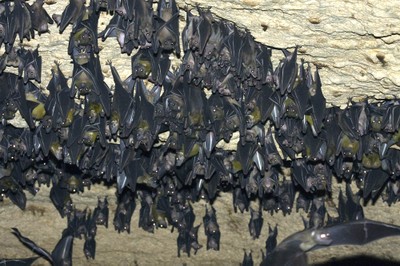 Migration occurs when birds, animals, insects and fish travel over long distances to go to places which are warm and have food. Some places have food for only one season and so, they have to travel to far off places to get food in the other season. Mostly living beings migrate in groups.

We think of birds when we are told about migration across long distances. But our bats are no less!

They find their direction using both their eyes and echo location. They use the position of the Sun to remember their paths!

A kind of bat called Mexican Free Tailed Bat travels up to 1300 kilometers while migrating from their winter homes in Mexico to summer in United States. Flying such long distances takes a lot of their energy and they become weak as they fly. Flying for 100 kms makes them lose 0.5 grams of their weight.

You may find this curious that bats who roost on trees never go to caves. Most of such bats are migratory as trees do not offer shelter in winter for them to hibernate.

Some of them, however use the tree hollows in winter.

In the picture on top left you can see World’s greatest mammal migration : 8 million bats flying together across thousands of kilometers and arriving in Zambia, Africa.

Picture on the right shows a similar migration in Texas, USA.