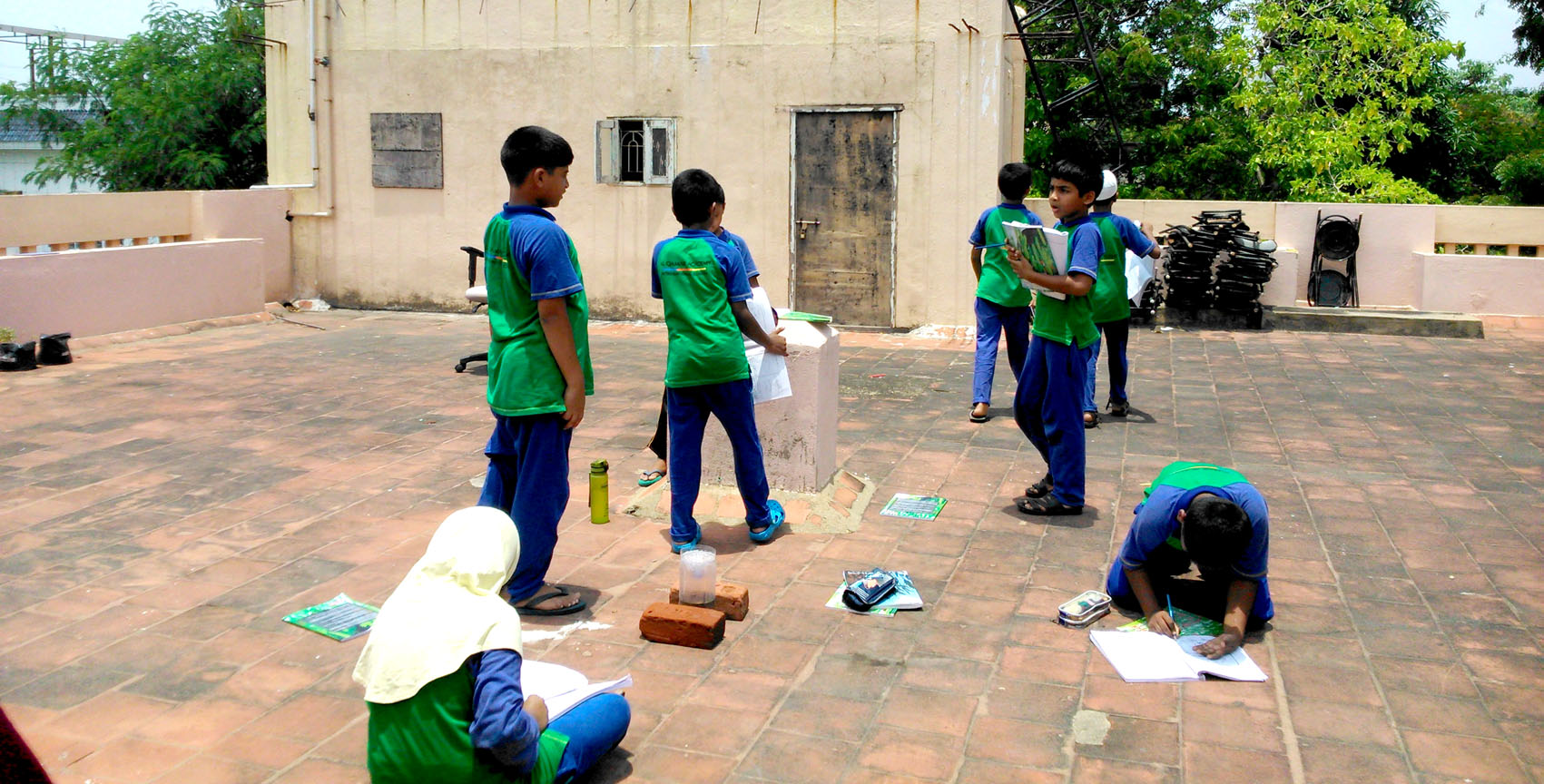 We went upstairs to the terrace to see clouds. We were asked to note the date, time and how the clouds looked. There were many clouds in the sky – so Aunty told each of us to look in one of four directions: East, West, North or South. At first we weren’t sure of the directions. But we know that we pray towards the West. From that we worked out East – it’s the opposite direction. Aneesa Aunty told us that if we point our left hand towards West and right hand towards East, then we are facing North. We stood with our arms stretched West-East and found which side was North (in front) and South, behind us.

Then we started drawing. It was not easy. The sun was strong and got in our eyes. The clouds kept changing in shape or moving. There were many interesting shapes they took. Aahil saw a camel upside down. Safwan thought he saw Australia. Ishal saw a monster’s hand. One girl drew clouds like in cartoon pictures – but Aunty asked her to observe and draw again. Most clouds were thick, white with shades of grey and rounded at the edges. They looked as if they were close to us. A few clouds were white and thin. The lower clouds were moving from North to South. When we came down, Aunty asked us what we thought the clouds were made of. Someone said water vapour, someone said gas, another said water, or dust. Hmm! We had a very long discussion. Ameeth thought it was hot gases but Safwan said if clouds were made of hot gases, then how come we get cool shade under them? Afsheen said clouds were made of cotton wool. Jayashree Aunty asked us if we had ever been inside clouds. That was puzzling. But then she asked if we had travelled in an aeroplane. Yes, some of us had. Umar remembered that the plane had flown through clouds and he couldn’t see anything. Aneesa Aunty asked if we had been to Kodai or Ooty. Clouds come down to the hilltops there. Yes – some of us had been there – it felt like fog and bit wet. We didn’t know those were clouds. If clouds are made of water, shouldn’t they fall down? Aunty showed that water falls when we pour it. So how come clouds stay up there? Jayashree Aunty asked if we had ever been in a shower where the water droplets form a mist – Yes!! Of course! But water is not lighter than the air? She told us that water droplets in the clouds are tiny so they get carried up and around, along with air currents in the cloud. But then she asked if clouds were lightweight. Well, they do look fluffy and light. But, she told us, clouds can weigh a hundred thousand tons! Wow!

Jayashree Aunty asked how the water got up into the clouds. We knew about that. When our mother makes rice, we can see the steam escaping from the rice cooker. We also see steam when Ammi makes tea. But to make a huge cloud we need a lot of water to turn to steam. Where does all that water to make a cloud come from?

Aneesa Aunty asked if it needs to be hot for water to dry up. No, our clothes also dry in rainy weather – when we put them inside under the fan. But they take a long time. Jayashree Aunty asked us how we could make clothes dry in rainy weather. Ameeth said you could put them in a car. A discussion started on whether the car windows should be closed or open? Should the car be moving or still. What if we tied the hanky to the top of the car and drove? Will the hanky dry if we shake it or keep it still? Aneesa Aunty said we’d be thinking about a lot of these questions in later chapters. That was a fun discussion though.

We watched and drew the clouds about ever other day over the next week. Every day the clouds looked different. On day there were just a few small clouds to the North. The rest of the sky was greyish blue. Then more clouds started to appear. Another day there were a few feathery-looking clouds, and the sky looked very blue.

Today we had to complete the writing parts in our workbook. There was a question on floods. We knew what a flood is. Chennai had terrible floods last year. We spoke a lot about about our experiences. Ishal had to escape in a boat to her great grandfather’s house because the damp (sic) gates were opened and a lot of water came. So did Shafeeq. Water was higher than him and up to his father’s neck. Some people came in a boat and took them out. But before that, they put all their belongings on the terrace. His father had to walk in the water to pull the boat – and there were snakes there. A lot of snakes also came to Umar’s Periamma’s house in Tambaram when it got flooded. His own house didn’t have any electricity for many days as the transformer was under water. Finally they put mud around the transformer and then switched on the electricity. Abdullah K. told us how he went with his father to many houses to distribute water packets and biryani to people stuck in flooded streets. Abdullah I. and Safwan went with their families to Aneesa Aunty’s house to give bread and water. Mariam’s dad was distributing medicines, but he didn’t let Mariam come with him. Umar went with his mom to give bags of clothes to Nepali families who were stuck. Zoya – who is not in our class – told us that they got water for the bathroom flush from the street – there was so much water in the street. Finally their drinking water finished, so they went to an Uncle’s house – because he had a hand pump. Interestingly, some of us wrote ‘rainy weather’ in the weather we liked best – because school got closed and we could have a free time. Yes, school was closed for a whole month last year.

Today we talked about droughts. Aunty asked us if we knew what was a drought. Aahil said it was when there was no rain and plants died. Safwan said he knew there was a drought in Saudi Arabia and Mariam said there was one in Michigan when she was there. Aneesa Aunty asked us if we had heard of the drought in India few months back. Umm! No. She reminded us to read our Young World regularly. Jayashree Aunty told us that Maharashtra where she comes from, had a terrible drought. She said that water had to be brought in trains from Kota, then put into tankers and distributed to villages. People had to walk many kilometres to get pots and buckets of water to drink and cook. Plants died so animals died. It was a terrible time. Then Ishal remembered how when they went to Bangalore they couldn’t stay with their relatives because they didn’t have any water. Aneesa Aunty asked us to talk to our parents or grandparents and interview them about a drought. She told us how Chennai had a bad drought about 10 years back and water was brought in tankers. People in many parts of Chennai regularly get their water in tankers that bring water from wells outside of Chennai. Hard to believe that one – especially since we were flooded just last year.