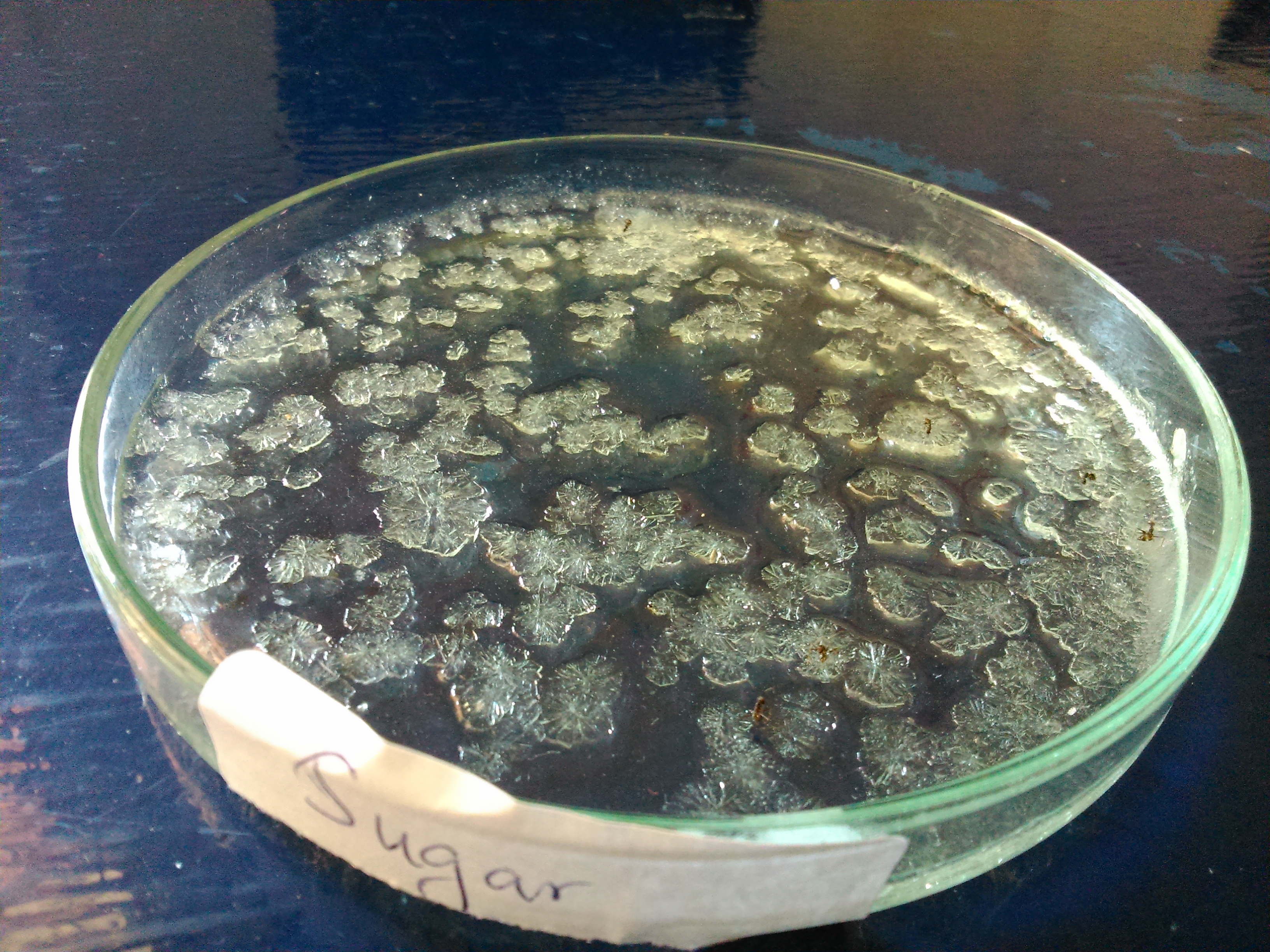 Today we made solutions. Aunty asked us if we knew what were solutions and how they were different from other mixtures. Safwan said solutions are a mixture where you can’t see the thing being mixed. Like salt. In most mixtures you can see the bits.

First Aunty said that she would add sugar to 50 ml of water. She added a large tablespoon. She kept stirring the water till all the sugar got mixed. She asked us how we could make the sugar dissolve easily. We said we could heat the water. “And what else?” she asked. We made many guesses — like stir it harder, pour the water from one container to another to mix it better and make a machine to stir it. Then Safwan quipped, “We can add more water!” “Yes!” said Aunty.

Once Aunty had added three tablespoons of sugar, the water changed colour. It was browner. It also looked thicker. When Aunty poured a little water with a spoon, it fell slowly. Also, someone noticed that the water level had risen from the 50 ml. Was that because of all the sugar in the water?

Aunty then poured some part of the solution into a flat transparent glass dish. Rafia Aunty had made a similar solution with common salt and water. She also kept stirring it, but finally there was a patch of salt which simply wouldn’t dissolve. We passed the glass around for everyone to see. Aunty poured some of this solution into another dish like the first one.

Aunty then squeezed a lemon into another beaker with 50 ml of water. She poured this into another dish. It looked cloudy. Seems like most of the lemon juice did not dissolve in the water. Rafia Aunty made labels for all the dishes.

Then came the most fun solution of all. Aunty poured 50 ml of water into a beaker and added a dark purple powder from a small plastic bag. She told us it was Potassium Permanganate. The water turned a dark colour when she added the powder. She stirred it with an ice cream stick. Aunty told us that potassium permanganate is used to kill germs in water. She poured this solution into another dish. We took the dishes to the terrace and kept them covered with a transparent plastic sheet. Tomorrow we’ll see what happens to these solutions.

Aahil reminded Aunty that we had to go see the solutions on the terrace. We were in for wonderful surprises. The water had completely dried and left behind crystals. The common salt solution dish was covered with a white layer of salt. The sugar crystals were beautiful — they looked like snowflakes. The potassium permanganate was amazing — it looked like an art-work — with criss-cross lines at the bottom. Only the lemon juice was boring — there were only bits of lemon sticking in the dish. But there were strange things we saw — a mystery. Aunty asked us for our observations — here they are:

We wondered why these different patterns of evaporation happened. Ameeth thinks it’s because the shadow of the edge of the dish made the evaporation different. Or maybe it was the tray in which we put the dishes. We aren’t sure. We must find out. Aunty has said we should design further experiments. Aniya Aunty came down and showed us a potassium permanganate crystal in the Foldscope. It looked like a log of wood. Crystal of pottasium permanganate through the Foldscope

Children viewing through the Foldscope

The beautiful crystals and their various patterns of formation fascinated us all. We wondered what made common salt crystals climb up and out, over the walls of the dish. In comparison, the potassium permanganate had climbed only a bit and the sugar not at all.

In “Crystals – A Handbook for School Teachers” (1972, p.19), Elizabeth Wood tells us that copper sulphate creeps up even more than common salt:

Why does this creep happen?

Our scientist friends say that glass walls have “high surface energy”: to create a surface of glass we have to put in energy in order to break the strong inter-molecular bonds in glass. Thus the molecules of glass which are on the surface have higher energy than those inside the glass. This makes a glass surface easy to adhere — i.e. stick to, or “wet out”. Molecules of water are not so strongly bound to each other: they get easily pulled apart, as we see when we splash or pour water. This contrast, between the weakly bound-together water molecules and their much stronger binding with molecules of glass, makes water creep along glass.

Dissolving common salt in water pulls the water molecules towards the salt ions and also towards each other; but the binding of these molecules with glass is still far stronger than their binding to each other. Besides, the freshly formed crystals of common salt also have very high surface energies, comparable to glass. They too make the salt solution stick to and creep along them. *1

Salt creep happens commonly in sea water aquariums which have to be continuously scraped clean of deposited salts.

Clearly there is a lot we need to understand about why crystals creep and why there is a difference in how much different crystals creep. In the meanwhile, based on what we learn from discussions and read in textbooks, here is our rough picture of what may have happened.

The salt solution would have initially climbed just a tiny bit (against the downward pull of gravity) on the vertical walls of the dish. When that part evaporated leaving a ring of crystals, the solution climbed a little further, over and between the already formed grains of salt and going just a little further beyond. The ring of crystals remained wet, and the solution got a lot more surface area to evaporate. It formed more salt crystals, covering and going a little higher than the first ring. This process went on, with the solution rising higher towards the rim, continuing to creep over the rim and down the outer surface of the dish.

Sometimes such creep may continue for decades together. Remember the Apollo 11 Command Module? Way back in 1969 this spaceship took astronauts into lunar orbit and then to land on the moon. On its return it splashed down in the Pacific Ocean. Forty eight years later, at the US National Air and Space Museum, scientists find that salts from sea water had got embedded in the material of the spaceship, and it has been creeping out on to the surface. Could this be because sea salts kept absorbing water from the atmosphere, making a solution that crept along, evaporated, crystallised, absorbed more water, so creeping even further? *2

For liquids we talk about ‘surface tension’ which is approximately the same as ‘surface energy’. We have read that potassium permanganate solution has lower surface tension than a solution of common salt. We also know that crystal growth depends on the surface energies of the crystal faces. We have to still figure out why the different crystals behaved differently.

We are guessing that the sugar solution had high surface tension. Perhaps in the heat of the terrace it turned into syrup. We know it is difficult to lift sugar syrup in a spoon — that is, form a new surface with it. And a drop of sugar syrup on a plate gathers in a bead rather than wetting the plate like water does.

Our fourth graders have got some scientists intrigued too, two of them trying the experiment for themselves, checking if our results can be replicated, and thinking how they could be explained. We are planning science fair projects based on this experiment. For many more of our observations on patterns and textures of crystal deposition, we have not even begun to ask, why? Our learning as teachers continues.

*1 For useful discussions we thank Deepak Dhar of IISER, Pune, T. N. Narayanan and Mustansir Barma of TCIS, Hyderabad and Samvit Mahapatra, visiting student from CBS, Mumbai, who is trying to repeat and try variations on the experiments. We have benefitted from discussions in the Q&A forum of the University of Illinois, Department of Physics which reports further interesting observations on salt creep.