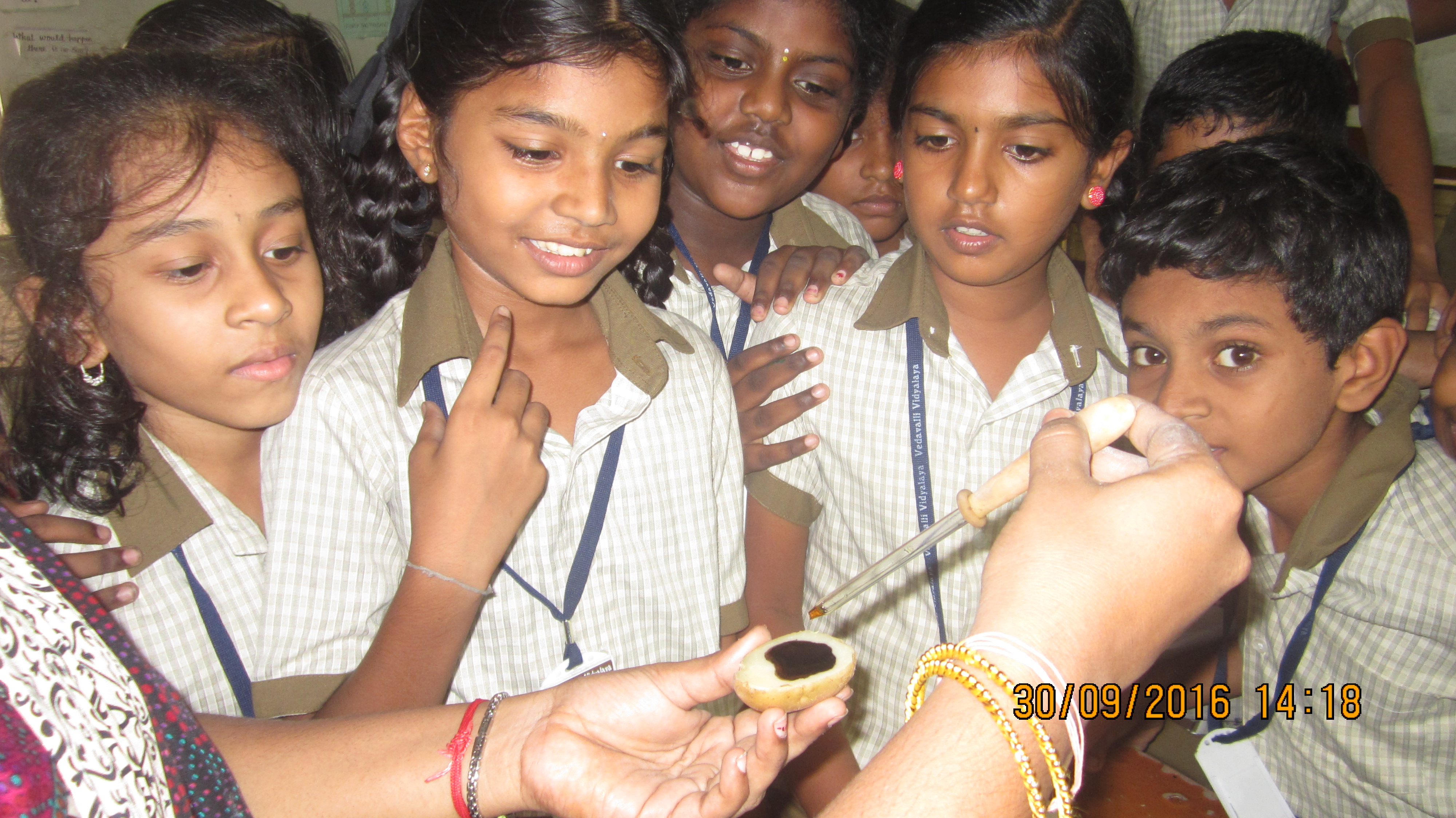 I am very excited to share my experience while teaching the Chapter, ‘Food in our bodies’ for Class IV-D.

I introduced the topic and described to the class the digestive organs and their functions. Students very much liked the line diagram of structure of a girl’s digestive system — they were eager to copy it in their notebooks. They were less enthusiastic to copy the function part of the diagram — perhaps it was not as shapely, nor did it carry the more interesting ideas of function. They showed curiousity about structure of the digestive system through questions like:

– What is the capacity of our stomach?
– Without any instrument how does the stomach churn food?
– How do we get hiccups?

Then all the students chewed either cooked rice or bread. Surprisingly only a few of them could detect the change of taste of starch turning to sugar. Perhaps this ‘sugar’ was not as sweet as they expected (see similar reactions in the Teacher’s Book, p.298).

We did the iodine test with rice and bread to show the presence of starch in food. Students got very excited to see the change of colour. The next activity called for scraping some potato into water and holding a dilute mixture of starch and water in the mouth, testing the mixture for starch before and after mixing with saliva. I had a feeling that this activity would be messy and unpleasant to do – imagine 30 fidgety students gargling in class! So I skipped it and went ahead.

Later I read about the experience in Al Qamar Academy and thought I must try this activity. I expected that such young kids would not have the patience to do it, so I decided I’d have to do it myself. Three months passed by and it was December before I actually got the time and motivation to introduce the activity in class. I was startled and happy when ALL the students cheerfully waved their hands and volunteered to do it.

Instead of 5-6 minutes as suggested, we all held the mixture in our mouth for a full 15 minutes! All this time the class spoke in sign language, writing questions on the board and asking how much time had passed. In their excitement a few kids swallowed the mixture but at the end most managed to spit it out properly, after which in sheer relief they gulped down water from their bottles and declared that it tasted sweet! Then we added iodine to their mixtures and students got really excited when it showed yellow instead of turning blue as it had done before holding in the mouth.

Some years from now when these students learn about enzymes and chemistry this experience might come back to them. After manipulating the models, students raised many interesting questions like:

– What will happen to the stomach if we eat food continuously?
– How does our stomach enlarge after eating a meal?
– Do fat people have larger stomachs?
– What will happen if we eat sand? Will it get digested?
– If we drink water, will it also stay in the stomach for 4 hours?
– Do fruit juices directly go to the intestine because already they are in liquid form?
– Do earthworms also secrete saliva and other digestive juices?

From the cloth model of the intestine students got a much-simplified idea about absorption of nutrients and water after digestion, through the walls of the small and large intestines, and finally their mixing into the blood. Students’ responses in their workbooks

After each day’s activity the students spent time completing their workbooks. All except one or two were able to do the writing, with or without my help. Some told me their response orally and I helped them with the spelling and writing. Here are some responses of students: Question: Is our digestive system similar to a kitchen grinder? How?

– In digestive system mix gastric juice, in grinder also mix water. So that, it is similar.

– Yes, it is similar. Both are making as paste.

– No, in digestive system we have stomach, digestion exit in anus. In grinder no stomach and anus.

– Yes, it is like stomach because it can also store the food.

Question: Does digestion occur while we are sleeping? Why do you think so?

– Yes, we are sleeping the food gets digestion and we get up we feel very tired because of work.

– No, because we are not chewing and drinking water.

– Yes, when we sleep, digestion is occur in stomach and go to anus in morning came stools and faces.

On a whole it was a very interesting set of lessons and discussions and as a teacher I ensured that all the students got an opportunity to experience the same.