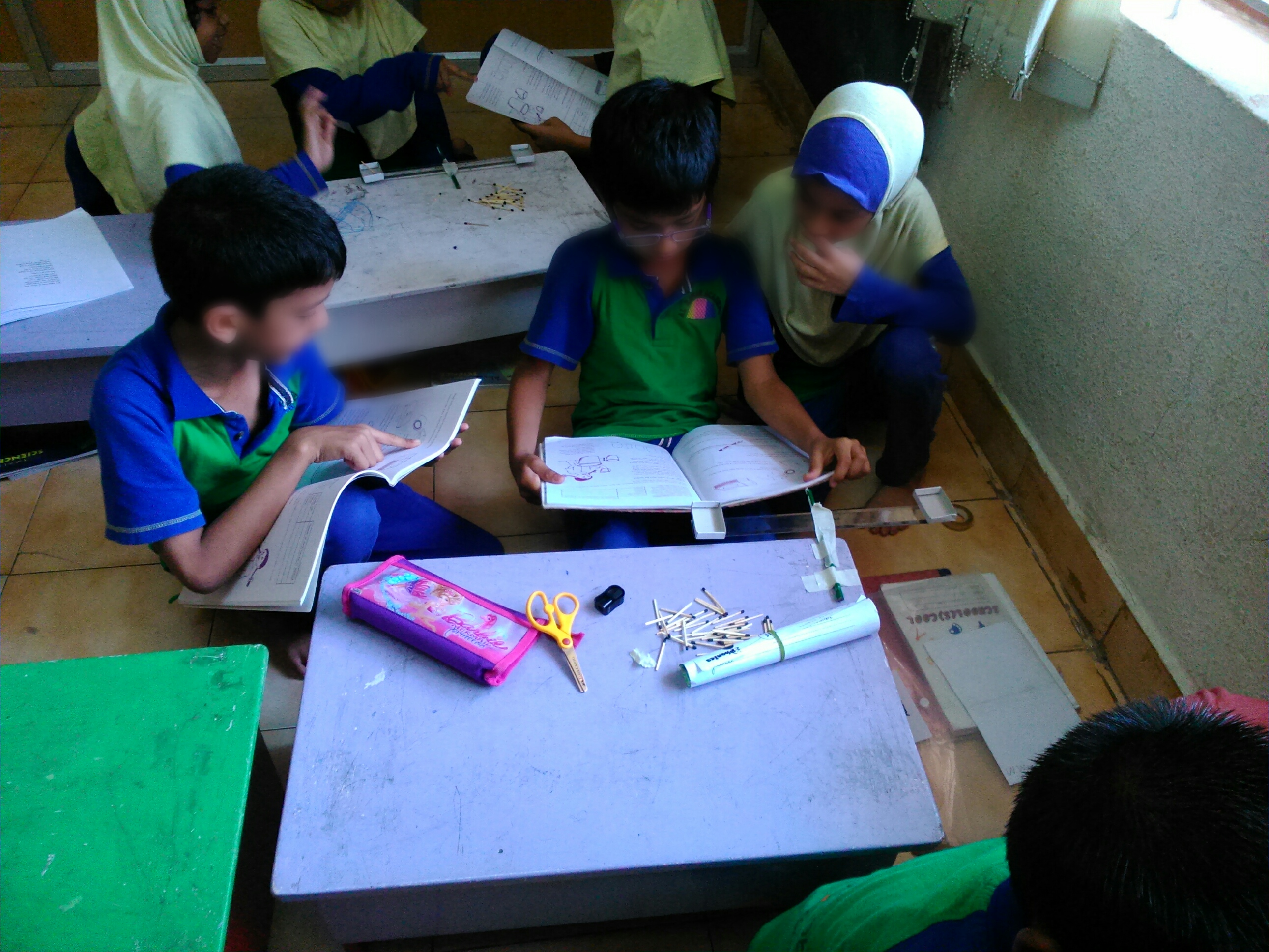 How many, How much?

One day in class Aneesa Aunty read us the story of Mini and Apu making rotis. It was funny how they forgot to measure how much of what they put in, and eneded up making dosas instead of rotis. After this Aneesa Aunty asked us to bring one recipe each from home.

Then she talked about numbers — how numbers are a language and tell a story. She asked us to go hunt for numbers everywhere. At first we didn’t understand what she wanted us to do. How can we find numbers just anywhere? She insisted we look everywhere. So off we went. Khadijah found a lot of numbers where children were doing maths — big numbers too. Aadhil found two numbers on someone’s chappal: ‘Ben 10’ and ‘7’. The first we recognised as a comic book hero who magically turns into 10 different ‘alien creatures’; ‘7’ was the size of the chappals. Sarah found numbers on a clock. Ayaan just quietly sat at his desk – he didn’t go anywhere. He found lots of numbers in the textbook itself — the page numbers, the unit and chapter numbers, the activity and exercise numbers. Hafsa found dates on a picture card about an artist. Aunty told us that these dates were when he was born and when he died. Really, numbers do tell stories. Then Aunty gave us each a small matchbox and asked us to find numbers on it, without opening it. We actually found quite a few — the price, the pin code where it was made, the phone number of the company that made the matchboxes and finally, the number of matchsticks in the box. A little puzzle printed on the back of the box also had numbers. Numbers really are everywhere.

Next we wrote and brought recipes to class. At first we thought aunty wanted us to make the dish and bring it. But she explained she only wanted a recipe, which said how much of each ingredient was needed and how to make the dish. Sarah brought a dosai recipe. Dakshin had an easy recipe for making laddoos. Abdul Malik’s recipe sounded delicious — banana pancakes. Aunty asked us to show with our hands how much of each ingredient we had to put in. Sarah lifted up one finger to show 1 egg. 2 cupped hands were for maida. A small fist size was the amount of sugar.

The recipe needed ½ cup of water and ½ cup of milk. Jayashree Aunty asked us if ½ cup of water and ½ cup of milk will together make 1 cup, more than 1 cup or less than 1 cup. Hmm! Aneesa Aunty asked us to vote — Some voted for less than 1 cup, some said more than 1 cup. Nobody voted for exactly one cup. Aunty brought 3 tumblers. They all had markings on the side to show how much liquid they could hold. She asked if we had seen milk packets — we all had seen half litre packets. Two of the tumblers could each hold 500 ml or half a litre of water. The third one had a mark for 1000 ml or 1 litre of water. Aunty filled up the smaller tumblers till the 500 ml mark — or that is what we thought. Then she poured all the water into the big tumbler. Guess what — the water came up below the 1 litre mark.

This caused a lot of excitement. Those of us who had voted for ‘less than a litre’ were triumphant at having been proven right. Khadijah insisted that milk and water mix so well, together they must add up to less than 1 litre. Aneesa and Jayashree Aunty looked perplexed and confused. They promised we would do the activity another time after checking out if the tumblers were okay.

We also did another activity — we lifted up our lunch baskets to see whose basket is the heaviest. Maryam, Asad, Aadhil, Dakshin, Khadijah and Saleem brought their baskets. We broke up into teams and took turns holding the baskets in each hand. We found that Asad, Dakshin and Aadhil’s baskets were the heaviest in the class. Then Aunty asked us to rank the three — which was the heaviest, which was next and which was the lightest. We all lifted the baskets two at a time, one in each hand; some of us also switched the baskets to the other hands to check if our feeling was right. We agreed that Asad’s was the heaviest basket of all. Aadhil said that was because he brings three tiffins for himself and his mother’s tiffin also in the same basket. There was a lot of competition among the boys to prove whose lunch basket was heaviest. In the next class we re-did the experiment of pouring 500 ml of water. Aunty brought two beakers. She showed us the line which had 500 ml written next to it. She poured water into them until the water line was exactly up to the 500 ml mark. This time we all checked it carefully, looking from one side and not from the top, and noting the water level in the middle of the tumbler, not near the sides where it was slightly curving up.

Aunty also had an empty beaker with a 1000 ml line on it. She again asked us if she poured both the beakers into the larger one, would the amount be less than, equal to or more than the 1000 ml mark. This time too we had different guesses. Then she carefully poured the water from both the beakers into the large beaker. Guess what — the water came up EXACTLY to the 1000 ml line! Aneesa Aunty looked pleased.

Aunty talked to us about how it is very important to be careful and precise when doing a science activity. Otherwise our results will be wrong. We also made balances today using a pencil, scale and two matchbox drawers. It was really difficult to make the scale balance on the pencil. We used double sided tape to stick the pencil on the table and the drawers on the scale. Two teams decided to attach the pencil sticking out over the edge of the table. Sometimes one drawer was lighter than the other so the pencil kept swinging up. We had to keep re-adjusting the scale and the pencil. Finally Khadijah’s team got the scale to balance correctly. They added one matchstick into the left drawer. It went down very very slightly. Then they put a matchstick in the other drawer. Next they added three matchsticks into one side. It went down. Aunty asked us why that side went down. We thought about it and then said, “because it’s heavier!” We used sundal (chickpeas) as another weight. We had to put 19 matchsticks before they balanced. Aadhil’s team put a pencil sharpener in one box. They kept counting and counting till they used 64 matchsticks to make it balance. Sarah’s team tried to weigh a one rupee coin. That one took many many matchsticks — we think it was 70. In the next class we played with water. First Aunty divided us into two teams. Each team got a mini bucket, a small coffee tumbler and a bigger plastic cup. We went to the tap and filled the small tumbler. Before pouring it into the bucket, Aunty asked us to guess how many tumblers would fill the bucket. Khadijah guessed about 18. Most of us thought it would be lesser number of tumblers. Khadijah’s guess turned out to be very close. We needed 17 and a half tumblers to fill the bucket. Then Aunty asked us if we would need more than 17 and a half or fewer plastic cups of water to fill the bucket. We had to think over this question. Hafsa guessed that we would need less cupfuls, and she was right. We only needed 5 cups to fill the whole bucket. Then Aunty gave each team 5 containers — a bowl, a coffee tumbler, a glass bottle, a water bottle and a mini bucket. First she asked us to arrange them from the tallest to the shortest. We drew pictures of these in our workbook. Then she filled another coffee tumbler with water. She told us she would pour a tumbler of water into each container. But before that we would have to guess where the water level would be. Asad guessed the level for the heart shaped bucket. He thought the water would be at a very low level — and he was quite close. He explained that the bucket was very wide. Some of our guesses were not right, maybe because the tumbler was broad on top and narrow at the bottom. But as the first container got filled our estimation got better. Then we counted how many tumblers we needed to fill each container. It was a surprise again — because the bucket which was quite short, held more water than the tall glass bottle.

We were puzzled yet again by a question in the workbook where we had to guess how many mugs of sand would be needed to fill a bucket which took 12 mugs of water. We also had to guess the number of mugs if the sand was level, or if it was heaped in the mugs. Rasmi Aunty made us do the exercise in the playground. First we filled a bucket with 12 glasses of water and marked the level. Then we filled it with sand. The bucket only needed 11 glasses of sand to fill to the same level. Perhaps we had slightly heaped the sand in the glasses, or we had spilt some of the water in the glasses. Water was impossible to heap in the glass, and very easy to spill. Now we could guess that if we heaped the sand more, we’d need even fewer glasses of sand.

In the next class Aneesa Aunty made us sing nasheeds and clap along. It was quite difficult — maybe because Hafsa sang a very slow nasheed. But we all joined in and enjoyed singing.

Then Aunty made us sit in a circle. We had to pass the duster to each other in the circle. Abdul Malik was elected as the timer. He had to count ‘Tick Tick One, Tick Tick Two’… It took us 8 Tick Ticks to pass the duster around. Khadijah then recited a tongue twister while we counted ‘Tick Tick…’. It took 8 Tick Ticks. Aunty read a poem from the Small Science Book while we counted. Then Dakshin wrote a sentence and we counted.

Finally we went to the stairs. One person had to climb till the top while another one counted ‘Tick Tick…’ to see how many seconds we took to climb up. Most of us took only 5 Tick Ticks, some took more. Aadhil was very quick and reached up at 4 Tick Ticks only.

It was a lot of fun.

*2 See the note on ‘drawing from observation’ in From inquiry to learning – 2.  Also see the articles on this subject by Dr. Karen Haydock — who incidentally made the illustrations for Small Science Class 4.