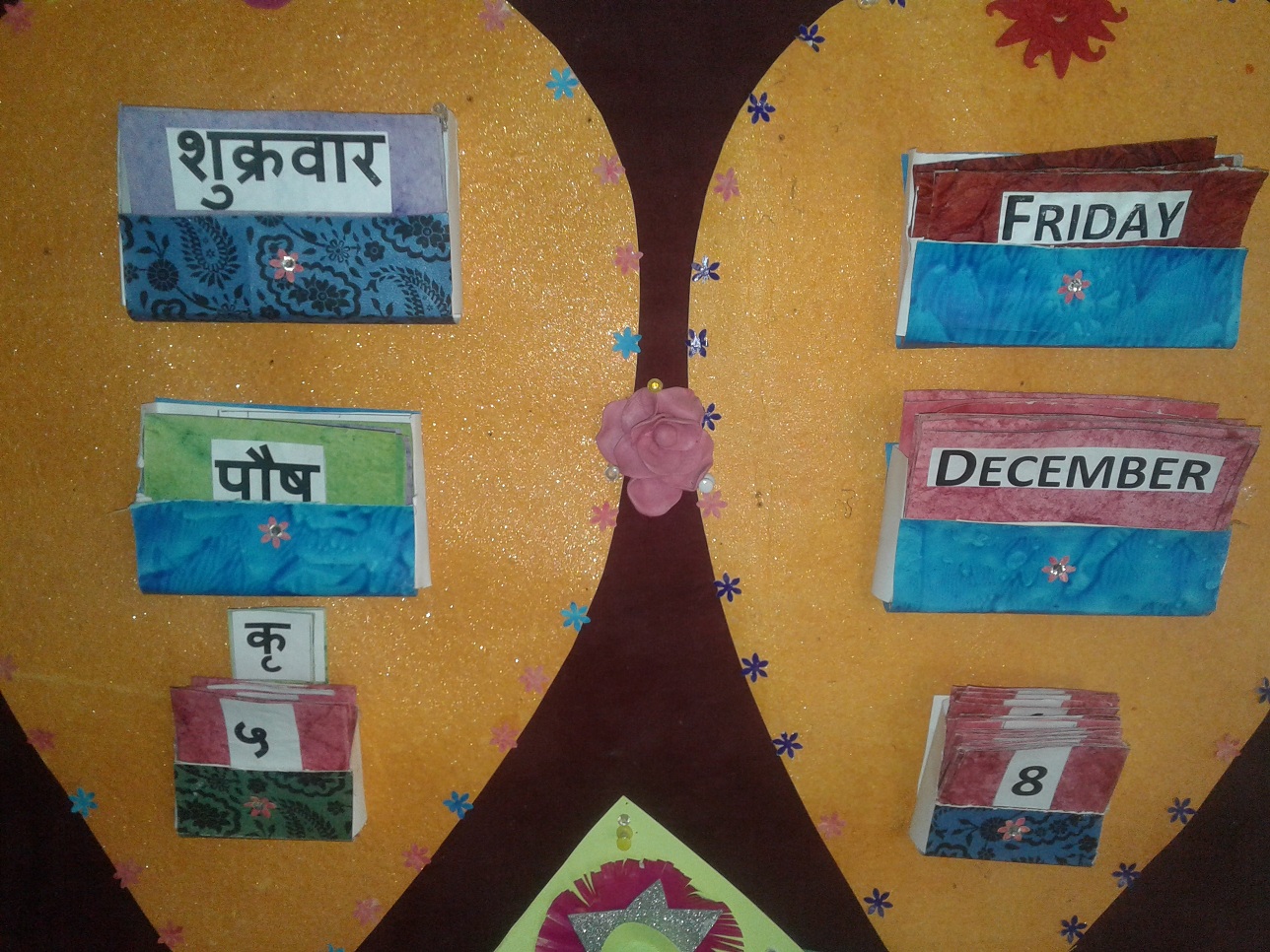 Outer Space and celestial bodies fascinate everyone, including children. Many countries invest lots of time and resources in exposing children to space research. Space exploration can also serve as a stimulus for children to enter the fields of science and engineering. How should we begin with it at the school level?

Phases of the moon are easily observable from anywhere. Children can, on their own, collect data on the moon’s shape and its times of rising and setting, and observe patterns in the data. Gradually they should come to visualise the sun-earth-moon configuration and reason out how the moon’s phases occur. In India we follow a variety of luni-solar calendars and almost all of our festival dates are determined by the the phase of the moon on that day. What better way to place science in a cultural context?

At Gyankriti our children write Gregorian calendar dates in English notebooks and Vikram Samvat dates in Hindi notebooks. The children are also regularly told to go to the terrace and observe the moon. We have two learning objectives associated with this:

1. Understand the phases of moon throughout the year and co-relate it with the Hindu calendar. [Subject: Science] Sample of dates written in Hindi and English notebooks

Here we explain the curriculum of the Indian Calendar at our school.

About the Indian Calendars

One can find more details about various versions of Indian Hindu Calendars and the astronomical concepts behind them on the website of the Positional Astronomical Centre of Indian Meteorological Department. They also publish the national calendar of India, Rashtriya Panchang, with the objective of unifying the divergent practices of Hindu calendar systems existing in different parts of the country and also to promote “panchanga” calculations on a modern scientific basis. Festivals of different communities and also various language versions of the panchangas are available on this website.

At our school we use Vikram Samvat, which is a commonly used luni-solar hindu calendar.

The Indian Calendar Reform Committee, appointed in 1952, identified more than thirty well-developed Hindu calendars, in use across different parts of India. There are two main calendars in the Hindu system. In North India, the month generally begins with the full moon, and in South India with the new moon. Festival days will still fall on the same day, or very closely, but the name of the month may be different. For example, Krishna’s Birthday falls on the eighth day of the dark moon; in the North this is in the month of Bhadra; in the South in Shravana.

Well that’s a bit complicated to begin with. Choosing the “perfect calendar” for our school was very confusing. In the end we decided that it didn’t really matter which calendar we follow, as our main objective is learning its co-relation with lunar cycles. We decided to go with Vikram Samvat which is the most popular version in Madhya Pradesh and hence most festivals in our region rely on its dates. The luni-solar Vikram Samvat calendar is 56.7 years ahead (in count) of the solar Gregorian calendar. For example, the year 2074 VS began in 2017 CE and will end in 2018 CE. For finding out the correct tithi every day we refer to the dates published in the local daily Dainik Bhaskar.

India has a diversity of religions. At present our school is small with a fairly homogeneous student population. As we grow in experience and diversity we may find the need to enrich our curricular content. For now we simply keep this converter as our reference.

We have introduced Grade 1 in this academic session and it is the senior-most class at our school. The curriculum outlined below is an extrapolation of what we have been doing recently, to what we expect to do in the coming years. This sequence is distinct from, and accelerated in comparison with what is outlined in the Small Science curriculum. Depending on our experiences the actual content might change over the years. We will keep you posted!

Acknowledgement: Dr. Anand Bhushan of the Mechanical Engineering Department, NIT Patna, helped us a lot in formulating the curriculum for teaching the Hindu calendars. You may reach him at: <anand.bhushan@nitp.ac.in>