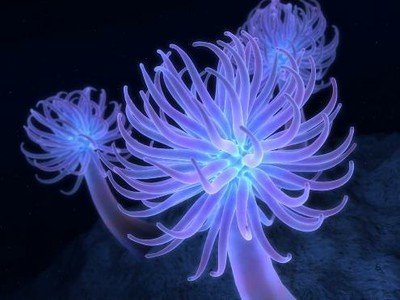 Sea Anemone and the Clownfish

Now we will turn to the partnership between the following two sea animals. Two animals ? ! There seems to be just one fish. Isn’t this so?

What are those things in the background? Plants?

They may look like plants but it is actually a carnivororus animal called Sea Anemone which eats fish and other sea creatures. What looks like branches of plant are actually its poisonous tentacles. It injects poison into the prey with the help of these tentacles and kills it. It then pushes them into his mouth which is hidden beneath these tentacles. It lies attached to the rocks and shells in the ocean. It can slowly crawl the ocean floor with the help of its hidden foot and swim using its tentacles! A sea anemone eating a shrimp in the sand What, then, is this tiny colourful fish doing in these poisonous tentacles?

This tiny colourful fish is called Clownfish and is infact a great friend of Sea Anemone.

The clownfish eats the dead tentacles of the sea anemone and therefore keeps it clean.

It helps the anemone find food. How ?

Some fishes like the Butterfly Fish can eat up the Sea Anemone. The Clownfish chases such fishes away from the anemone.

It also swims around the tentacles and mantains flowing water between them with the help of its flapping fins. This keeps the anemone healthy.

Although Sea Anemone is an animal, it needs fertilizers like plants for the growth of its tentacles.

Excretion of clownfish provides the anemone with fertilizer.

So, we learn of the so many ways the little Clownfish helps the Sea Anemone.

How does the Anemone help the Clownfish?

The Sea Anemone provides protection to the clownfish. Big fishes who can eat the Clownfish keep away from the fearsome, poisonous tentacles of the Anemone.

Now comes the important question. Why don’t the Anemones eat the Clownfish ?!!

Clownfish have a sticky liquid called mucus all over their body that prevents them from being eaten by the Anemones.

Some scientists think that the clownfish rubs itself with these tentacles and smear the anemone mucus all over. The anemone feels around with his tentacles and as the skin of Clownfish is covered with the same mucus as them, he confuses the fish for itself!

Clownfish are one of the most interesting living beings who live in a group.

What is so unique about them? Let us find out.