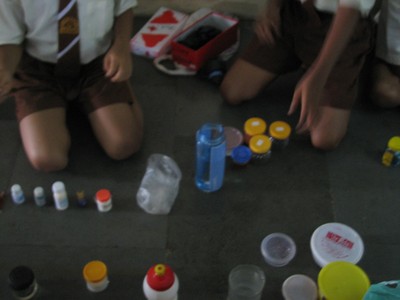 We arrived at AK Joshi School located in a busy locality of Thane on a wet afternoon just in time to observe class IV students engrossed in an activity session. The school operates in two shifts with the primary school running in the afternoon. They were carrying out the ‘float, sink or mix’ activity of the Water Unit (unit 3).

There were about 50 children sitting in groups of five in a large hall…ready to engage in hands-on exploration of the properties of water; a real test for activity based science! And they did it!… each group had brought containers, mainly made out of mineral water bottles with their mouths cut off and solutes to make solutions. Together, in groups, they jointly engaged in exploring the solubilities of the solutes. The teacher called out the name of the solute to be tested and the students eagerly mixed the solutes to see what happened. It was amazing how such a messy activity could be carried out in such a disciplined manner by such a large number of nine year olds.

The students seemed comfortable and used to working together. In most groups, the girls seemed to take the initiative of mixing the solutes and there were some disputes on who should be changing the water. The principal told us that they had been trained to change water from the wash basins which they periodically had to do to try out the property of a new solute. The solutes they used included solids like salt, stone, plastic and liquids like cooking oil, kerosene, milk, vinegar, honey, spirit and nail paint. These were brought by the students themselves in little medicine bottles and dabbas. The teacher moved from one group to the other and monitored their activity, asking the children if it mixed, remained separated or whether the solution obtained was turbid or clear. The nail paint was mixed in the end and it was really sticky…there was a lot of excitement when one little boy appeared with nail paint all over his hands. The teacher immediately brought him to the front and showed them how spirit can be used to remove the nail paint… a very spontaneous and appropriate ending to a fun-filled session of exploring properties of water!