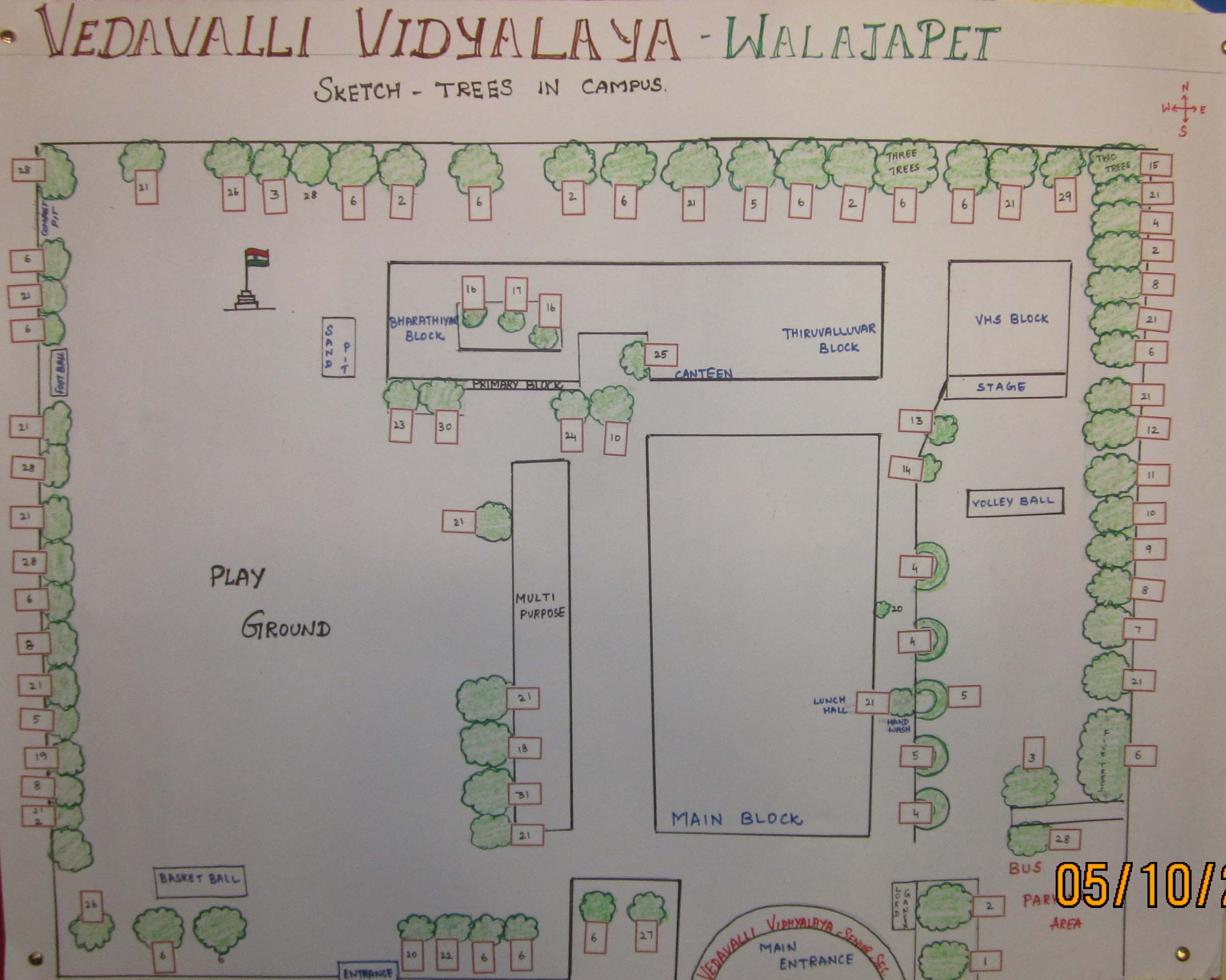 This map shows the trees at Vedavalli Walajapet campus. The number near each tree corresponds to the serial number of that type of tree in the Table below. A team of three teachers, Ms. Elavarasi, Ms. Pappitha and Ms. Rathna, along with our stores in-charge, Mr. Palani, carried out this documentation of our trees. Ms. Lakshmi, our Biology teacher, helped by giving us the names of most of the trees.

We found a total of 117 trees on our campus. We got information on the uses of trees from the World Book Encyclopedia in our library. We referred to ‘Common Trees’ by Fr. H. Santapau which is available on the Internet Archive https://archive.org/details/CommonTrees and on Arvind Gupta’s website. We also consulted Mr. Kamaraj, botanist and Mr. Saravanan, Sr. Education officer of WWF – India, Chennai branch.

Trees in our campus and their common uses :

It is a source of shade. It has many health benefits to cure problems of hair, tooth ache and diabetes.

In auyurveda it is said that every part such as leaf, bark and fruit is used in medicine. A shape of the leaf is like a heart. Also known as bodhi tree or ashwatha tree.

Is considered ornamental and pleasant fragrance of theflowers renders it ideal as a garden tree. Wood is used as timber and bark is used as an inferior substitute for cork. The leaves are also used as a cheap substitute for tobacco in cigarettes. Roots – as antiansm – athetic.

Mature teak fetches a very good price. Leaves of the teak wood trees are used in making pellakai gatti (jack fruit dumpling), where batter is poured into a teak leaf and is steamed. Useful to make furniture.

The ripe fruit has much traditional use

The leaves of the banyan are large, leathery, glossy green and elliptical in shape.

Is renowned for its shade and is well known in traditional uses for its medicinal uses. It is also grown as a host plant for lac insects. Its potential use as a source of bio – diesel.

The leaves are used for ornamental decoration during festivals. The tree is a main attraction in gardens throughout India. In past,the flexible, straight and light weight trunks were used in the making of masts for sailing ships that is why the tree is also known as the mast tree. Today, the tree is mostly used for manufacturing small articles such as pencils,boxes, match sticks, etc….

The hard wood and bark of the tree are used in traditional medicine. The wood extract used for sore throats and diarrhea.

Is cultivated for the seed fibre and a lso known as the Java cotton, Java kapok most used common name, silk cotton.

The fruits are red pinkish to greenish brown in colour. It is multipurpose tree with edible and indehiscent pods. Pulp is used in tanning industry. Trunk is spiny, leaves are bipinnate.

With a single straight trunk. The oily milk derived from it is are commonly used in cooking and frying.

A decoction of leaves and fruit is taken for the treatment of liver complaint, cold, fever and rheumatism, an olive – brown oil is obtained from the seed is used for burning.

This wood has been traditionally used as a sacred wood. The priestly classes extensively use this wood on many of their rituals. It is also used to make furniture.

East Indian walnut – It is used to prepare various medicines. It is a non – toxic tree. This tree contains alkaloids, tannins, saponius and flavoniods which has medicinal action. It is a nitrogen fixing tree. In ayurveda its use is specially indicated in treating bites and stings from poisonous animals such as snake.

It is a source of antioxidants, vitamin c and potassium. A mixture of raw fruit and leaves is cure for skin infections such as boils an bruising.

The tree yields a gum belonging to the tragacanth group. The seeds yield clear, almost colorless oil which is much valued as a lubricant, and is also used as perfume.

It is known as “the village pharmacy” because of its healing versatility and it has been used in Auyurvedic medicine for more than 4000 years.

The flowers and buds are used as a pat herb, and eaten like spinach. The root system is frequently very shallow often resulting in the tree being easily blown down.

It is known for its feathery foliage and ease of care. One of the oldest groups of plants dating back to prehistoric times not tolerates too much moisture. Well known for harboring pests like scale bugs.

Guava leaves are best known as a natural pain reliever. The leaves have long been used in folk medicine to treat a number of aliments such as cough, dysentery, skin diseases and cholera.

Aliments such as coughs, dysentery, skin diseases and chalipa. The plant is a feather palm, which means that its leaves are pinately unbranched stem. Today palms are popular in parks and gardens.

The wood has a wide variety of uses, and the foliage is used as a fodder crop. The pods remain in the trees almost till the next spring and at that time they become black and fragile.

Co2 is taken out of the atmosphere, removes 13 tons of air borne pollutants per acre per year. They are considered as and agricultural product.

The bark has been traditionally put to use by indigenous Australians as a toxin for fishing. Australians burn its leaves and smoke the ash to obtain a state of inebriation.

Health benefits of Tamarind- As most ancient foods do, tamarind has a long history of medicinal uses. Many involve easing stomach discomfort aiding digestion and use as a laxative. Tamarind preparations are used for fevers, sore throat, rheumatism, inflammation and sunstroke.