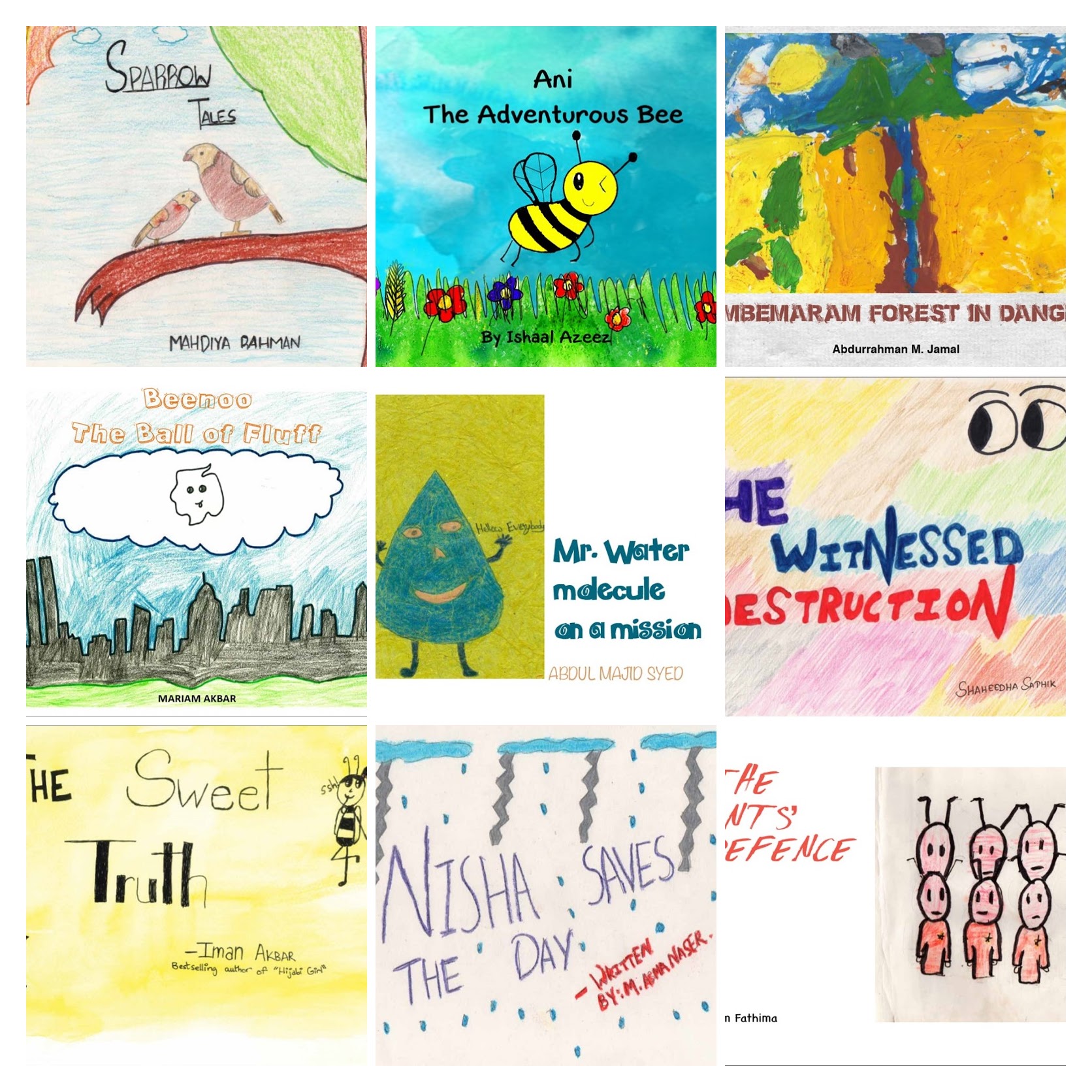 Al Qamar students of Grades 4-8 worked with K. Ramnath Chandrasekar, a wildlife educator and nature conservationist, to write books with an ecological / social theme. The rich crop of books that came out of this three-month adventure surpassed our fondest dreams. I’m sharing this story on the Small Science forum, because Al Qamar’s little authors and teacher-mentors drew much inspiration from this school’s Small Science experience over the past seven years. Now two months of hard work and skilful mentoring resulted in drawing out unexpected talents in our children.

Ramnath began this process around the middle of March 2017, with a group session that introduced the children to the process and components of book writing. Children then selected themes that they wanted to write on. They had three one-on-one sessions with Ramnath over which they discussed and wrote their drafts, followed by several sessions with teachers: to work and rework and rework and rework their drafts. They made their own illustrations or, as in the case of one child, took photographs. The work was entirely theirs — no adult wrote for them. This was important. Often adults don’t realise or trust the children’s skills and take over from them, a tendency that we scruplously avoided.

Teachers played the supportive role of editors and typists. Initially children were confused as to what they could write about. So I had a brainstorming session where we jotted down all sorts of ideas. The few conditions stipulated were — the story had to be rooted locally, had to address some environmental or social issues, and had to have local names for characters. Finally, most children hit upon their theme and the characters. Ramnath gave them blank dummy books in which to outline their story page by page and create rough illustrations. In the second discussion with Ramnath, the children decided whether they would type up their stories or handwrite them. Handwritten stories involved a huge commitment and perseverance. Only the older girls opted for this. Some children were quite sure they couldn’t draw anything, but Ramnath’s gentle but firm insistence had them agreeing to give it a try.

Two weeks were spent with children fleshing out their stories and trying the hands at rudimentary illustrations to create their dummy books. Teachers worked hard with the ESL (English as Second Language) children — in correcting grammar, highlighting spelling errors and generally helping children tighten the plot. By the third meeting the stories were very close to the final version. As teachers, we were frankly overwhelmed by how beautifully this was turning out.

Now it was time to pen the final books for those children who were handwriting them. The first step was to choose paper. Children visited a well-stocked stationery shop and selected high quality thick paper. One chose handmade art paper for his illustrations.

Then came the days of hard, hard painstaking work as children created each page by hand. Ramnath insisted on a high-quality output with no mistakes. This meant that the students had to rework and rewrite several times. They spent marathon sessions in adding in the illustrations as well. Some children pretty much worked 16 hours — driven by their own inner need for a perfect final product. Sleep, food, everything was put on hold. For the younger ones, teachers did spend time in cajoling, consoling, begging and pleading, because we could see the glimmer of gold that was coming up, even if the tired children sometimes lost sight of their goal.

Finally, the handwritten books were sent for scanning and pre-printing preparation.

Of the 15 students who began this process 13 had completed their books.

The typed books now took a load of work — as teachers and Ramnath struggled with software to align, place and mix text with illustrations just as the children had designed in their dummy books. This process itself took a good week.

In mid-May, two months from the day we started, the books were ready for printing. As the first copies reached us, hot off the press, our excitement, delight and complete happiness knew no bounds.

Finally, the books were “launched” in July. The event had notable visitors — including parents, well-wishers, reporters as well as distinguished invitees — Dr. T. D. Babu and Ms. Shobha Menon from Nizhal, Mr. Sekhar Raghavan of the Rain Centre, Mr. Sridhar Lakshmanan of ecoLogin — all who have provided inspiration to the children over the years. Prof. Jayashree was represented by Prof. Ramadas of the Chennai Mathematical Institute.

Children took to the stage and gave speeches on their books and the process of writing. Later, there was an exhibition of their books where visitors got a chance to meet the authors and interact with them directly. To their delight they got a number of orders for their printed books. However, within a few weeks, GST got imposed on book sales — hiking the cost of each book by 18-28% and making it prohibitively expensive to print. Finally, the children agreed to publish the books online and make them available as free downloads so the social message in these books gets spread. Digital versions of all the books except one, which may go in for formal publishing, are at https://issuu.com/alqamaracademy. One notable experience which helped the children write books was their annual participation in the NaNoWriMo Young Writers’ Program. Nanowrimo is a seat-of-the-pants, writing marathon, where children set their own word count targets and pen novels (or part of novels) in the space of one month.

The books reflected what was important to the child. As their stories developed I could see the underlying impact Small Science had made. Abdul Majid’s story about the Water Molecule was directly inspired by Dr. Karen Haydock’s story and illustration on the water cycle in Small Science, Class 4, and the subsequent visit to the Rain Centre in Chennai to understand rainwater harvesting. So was Asma’s, a 7th grade ESL student. Anam’s, Ishal’s, Mahdiya’s and Iman’s stories were all about little creatures — which the children have been observing every year they did the Small Science chapters. Shaheeda’s and Fathima’s stories on trees had their roots in the Small Science chapters on plants, and the Tree Walks we took them on as a part of teaching Small Science. When we started down the path of using Small Science in 2010, little did we realise how much impact the curriculum would have in shaping our thoughts, ideas and work. Today we are even more firmly committed to Small Science.